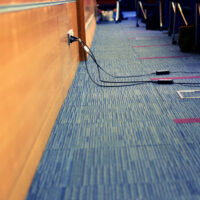 A prominent Disney-affiliated hotel and another company are being sued after an elderly woman tripped and fell over an unsecured cord resulting in a knee injury that required surgery. The woman maintains that the hotel should have secured the cord better, placed warning signs, or otherwise taped the cord down. The company that owned the equipment that the plaintiff tripped over has also been sued for negligently placing the cord in an area that could create a tripping hazard.

The plaintiff hopes to hold Disney responsible for her medical expenses and pain and suffering damages. She has filed a lawsuit for more than $30,000.

Proprietors can be held negligent in trip and fall lawsuits under three conditions:

In this case, the hotel is being held liable for failing to exercise due care in inspecting the premises for a trip and fall hazard. Even though the other company may have created the hazard by placing the cord in a spot where people were walking, the proprietor ultimately has the responsibility to ensure the premises are secure. While it is likely that the Disney hotel will attempt to blame the other company for the tripping hazard, the hotel’s duty of care as a proprietor means that they will share some of the liability. Obviously, the company that placed the cord in a walkway is primarily responsible for the injury.

In each case, however, the matter is litigated on the grounds of foreseeability. Could the proprietor have foreseen that the dangerous condition would cause injury? In most cases, an average person exercising due care could predict that placing a cord in a walkway could potentially lead to injury. Further, the hotel would have had a duty to ensure the premises were secured after the company set up whatever they were setting up. Because the Disney hotel failed in their duty of care, they are responsible for the injury. The company that placed the cord in a walkway is also responsible for the injury.

Defenses to trip and fall lawsuits

In most cases, the defendant will blame the plaintiff for causing their own injuries. This can include alleging that the plaintiff was not themself exercising due care in watching where they were going. While this is a strong argument to reduce a defendant’s liability, it usually doesn’t eliminate it entirely unless the plaintiff was behaving weirdly and endangering themselves.

Eighmie Law Firm represents the interests of those who have been injured due to slip and fall accidents. Call our Port St. Lucie personal injury lawyers today to schedule a free consultation and learn more about how we can help.