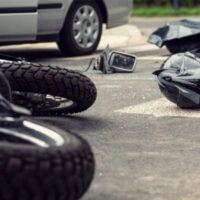 Another left-turn motorcycle wreck has claimed the life of another rider. This time, the victim was a Florida teenager.

The wreck occurred at the intersection of Northwest 14th and North Seacrest. A 49-year-old man driving a Mercury Grand Marquis turned in front of an oncoming motorcycle. The force of the impact propelled the rider off his bike, killing him almost instantly. Few other details were available.

Crashes like the one in the above story make up over a third of the fatal motorcycle wrecks in the United States. Such collisions might be even more common in Florida, where many motorists drive large vehicles, like SUVs and pickups, which are difficult for motorists to see around.

This difficulty only explains part of the problem. Frequently, motorists simply do not look out for motorcyclists. Most riders who have gone down probably heard the tortfeasor (negligent driver) say something like “You came out of nowhere and I never saw you.” This weak excuse often sets up the last clear chance defense. More on that below.

These collisions usually throw riders off their bikes. As a result, they usually sustain catastrophic injuries, such as:

Turning in front of an oncoming vehicle, whether it is a car or not, is illegal in Florida. As such, the negligence per se doctrine often applies in these situations. Tortfeasors are presumptively liable for damages if:

Additional evidence of negligence includes things like the tortfeasor’s speed at the time of the crash and failure to signal the upcoming turn or lane change.

Frequently, emergency responders do not issue such citations, even if the tortfeasor was clearly in the wrong. Many police officers consider car wrecks a civil matter between insurance companies, and they do not want to get involved.

The ordinary negligence doctrine could apply as well. Essentially, negligence is a lack of care. Operators have a responsibility to drive defensively and avoid accidents when possible. Turning in front of an oncoming motorcycle arguably violates this duty.

Frequently, insurance company lawyers argue that since the rider “came out of nowhere,” the rider had the last clear chance to avoid the wreck. This doctrine, which often applies in head-on and rear-end crashes, excuses negligence in these cases.

However, the rider must have the last clear chance to avoid the crash, as opposed to any possible chance. Frequently, if a rider steers suddenly, the rider will cause a worse crash than the one s/he avoids.

Motorcycle accident victims are usually entitled to substantial compensation. For a free consultation with an experienced Port St. Lucie personal injury lawyer, contact Eighmie Law Firm, P.A. You have a limited amount of time to act.