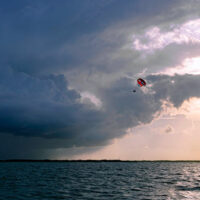 One wrongful death and two personal injury lawsuits have been filed against a parasailing company after a tragic accident that left a mother dead, her son injured, and a nephew also injured. The family contends that the weather was not conducive to parasailing with winds above 30 mph that day. The parasail they were riding in crashed into a nearby bridge causing the death and injuries. A second lawsuit against the marina is likely to follow.

Attorneys for the plaintiffs described the weather conditions as horrific and said that both the marina and the parasailing company committed negligence leading to the deaths. According to weather reports, a thunderstorm had come in off the coast contributing to high winds and squalls. The parasail became pegged in the high winds and eventually struck a bridge.

The two younger children were able to be saved although they suffered significant injuries. The mother sustained head trauma and later succumbed to her injuries.

There are two allegations being made against the parasailing company. Firstly, the plaintiffs claim that the inclement weather made parasailing dangerous and that the family should have either been warned that the weather was not suitable for parasailing or been prevented from renting the parasail in poor weather.

While charging the captain with a crime for making a difficult decision may not necessarily be in the cards, the choice to allow parasailing in weather with winds strong enough to cause the parasail to peg in the first place is a problem for the parasailing company. Even if the captain had no choice but to cut the cord, that would substantially reinforce the plaintiff’s claim that the weather conditions were not conducive to parasailing. If, on the other hand, the weather conditions were conducive to parasailing, then the cord should not have been cut. So the plaintiffs have the defendants between a rock and hard place. Either the cord was cut without good cause or the weather made parasailing dangerous.

The plaintiffs will further argue that the parasailing company did not want to turn away money even in dangerous weather. In other words, the company put profits over people resulting in the death and injury of their customers.

If you’ve been injured in a boating accident, water ski accident, or parasailing accident, the Port St. Lucie personal injury attorneys at Eighmie Law Firm, P.A. can help you recover damages related to your injuries. Call today to schedule a free consultation and learn more about how we can help.