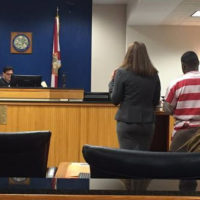 MARTIN COUNTY — Instead of facing the possibility of life in prison, Trayvon Jackson likely will end up serving less than 25 years in prison for charges related to the 2014 death of Dylan McKelvey.

Jackson, now 28, had pleaded not guilty to first-degree murder in the death of 18-year-old McKelvey, whose body was found March 5, 2014, in an Indiantown field. Jackson’s trial was scheduled to begin next week.

The deal included Jackson changing his plea to no contest for a lesser charge of second-degree murder, Henne-Eighmie said. It also includes Jackson serving a mandatory minimum of 25 years in prison with time served credited.

“At the end of the day,” said Henne-Eighmie after the hearing, “it seemed that this was in (Jackson’s) best interest.”

Because Jackson spent eight years behind bars on drug charges and was released in February 2014 just weeks before McKelvey’s death, Jackson was a re-offender who could’ve faced a stiffer sentence if not for the plea deal.

Plus, Jackson made three different statements to law enforcement officials about McKelvey’s death, including two that implicated him, she said.

“If we went to trial,” Henne-Eighmie said, “the risk was that he was facing mandatory life (in prison).”

Jackson’s case was delayed because of witness problems that occurred over the years and the rumor mill on Facebook, she said.

“A lot of those people who had come out and said ‘I think it’s so and so’ have disappeared or changed their stories throughout time,” Henne-Eighmie said. “So, it’s been more difficult.”

Murder cases can take a long time, Henne-Eighmie said, but she also had to play catch-up on the case when she took over Jackson’s defense from a different attorney.

“Ultimately, he feels reassured that he knows he can see the finish line,” Henne-Eighmie said. “He’s pleased that we believed this was the best possible outcome for him.”

McKelvey, the grandson of employment website Monster.com’s founder, was living “the gangster life” before a county worker found him dead in an Indiantown field behind the former Booker Park fire station, said Sheriff William Snyder in 2014. He had multiple gunshot wounds to his torso, buttock, chest and head.

The 18-year-old — whose late grandfather was billionaire philanthropist Andrew McKelvey — had gold teeth and the tattoos of a Stuart-based gang on his hands, according to sheriff’s detectives and more than 1,500 pages of court documents.