Are Pedestrians Entitled to Damages if They Were Jaywalking? 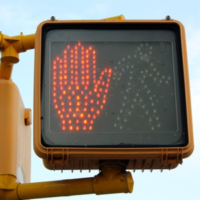 Still, that does not mean that when a pedestrian was jaywalking at the time of the crash, they are not entitled to any compensation. If you have been hurt, a pedestrian accident lawyer can review your case and advise on the amount of damages you deserve.

Determining Liability in a Jaywalking Accident

Jaywalking refers to any time a pedestrian crosses the street without using a crosswalk. While the Florida Statutes do not specifically refer to jaywalking, it is against the law, but a violation will only result in a small ticket. Jaywalking is dangerous because it can result in a pedestrian being struck by a car and becoming very hurt.

Even though jaywalking is against the law, motorists are still expected to watch for pedestrians and take reasonable actions to avoid hitting them. As such, when a motorist strikes a pedestrian, they can still be held liable even when the pedestrian was jaywalking. However, if a pedestrian jaywalked in such a manner that made it impossible for a motorist to avoid them, the pedestrian can also be found liable. For example, if a pedestrian darted out in front of a vehicle and the driver did not have enough time to stop, the jaywalker may be found liable for the accident.

It is not uncommon for both parties to be found liable in a pedestrian accident. This is especially true when a pedestrian was jaywalking because they broke the law, but motorists are still responsible for avoiding pedestrians. When both parties are found at fault, they can still each claim compensation under Florida’s comparative fault law.

Florida follows a pure contributory negligence law, which means that accident victims can claim compensation even when they were mostly at fault for the crash. The amount of compensation received though, is reduced by the accident victim’s same percentage of fault.

For example, a jaywalker may step out into the street thinking the way is clear. A motorist may be speeding though, which does not leave the pedestrian with enough time to clear the way before getting hit. Due to the fact that both parties broke the law, they may both be found negligent. If the pedestrian is found 25 percent at fault because they were jaywalking, any compensation they receive will also be reduced by 25 percent.

Comparative fault is a common defense used in pedestrian accidents because liable parties do not want to pay the full amount of damages. If you were hurt by a motorist while jaywalking, the motorist may be successful with this argument. At Eighmie Law Firm, P.A., our Port St. Lucie personal injury lawyers know how to refute these arguments to help you recover the full damages you deserve. Call us today at 772-905-8692 or contact us online to schedule a consultation.