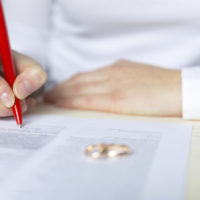 The division of marital property is often one of the most contentious areas of a property settlement in a Port St. Lucie marriage dissolution case. That is probably because, along with the amount and duration of alimony payments, this process is also one of the most subjective family law areas.

Most of the applicable rules are found in Section 61.075 of the Florida Statutes. This process includes not only the division of assets, but the division of debt as well. Most divorcing couples have substantial amounts of both.

The general rule is deceptively straightforward. Property acquired before the marriage or by gift is non-marital property; anything else is marital property. But if the couple was married for longer than a few years and/or pooled their financial accounts, the line between the two is rather fuzzy. Most couples do both of the aforementioned things.

Both these examples are classic illustrations of commingled property. During a marriage, many couples do not bother to separate income, debts, and assets into “yours, mine, and ours.” As a result, problems like this are extremely common in Port St. Lucie divorces.

Both of these examples may require reimbursement. If Husband spent $10,000 in marital funds on alimony, his wife might be entitled to $5,000 from Husband (her half of those funds). The actual amount may vary based on the factors listed below.

The second example above also illustrates another principle as well, viz, transmutation of assets. If Wife’s gift funded improvements which were basically cosmetic, such as new carpet or windows, Wife is probably only entitled to reimbursement at most. But if the gift funded major improvements, such as a new roof or a stronger foundation, the result might be different. Given these facts, a Port St. Lucie judge might decide that the rent house has transmuted from marital to non-marital property, and Wife may be entitled to the entire thing.

Since every divorce is different, there is no one pre-set formula to determine property division. Instead, the Port St. Lucie judge can apply various factors. All of them are weighed about equally. Some prominent ones include:

A special honorable mention goes to agreements between the spouses. Most Port St. Lucie judges uphold these agreements even if they are slightly one-sided.