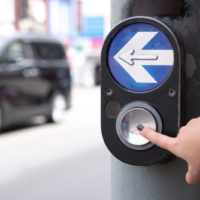 A recent pedestrian-vehicle accident which left a man dead highlights two of the most common issues in these cases.

The wreck occurred on U.S. 1 near the Roosevelt Bridge. According to police and witnesses, a blue Dodge Avenger was southbound on U.S. 1. It may have been traveling a little above the posted 45mph speed limit. The driver struck a 49-year-old man, killing him almost instantly.

The man was not crossing inside a crosswalk. Authorities speculate that he may have been going to, or coming from, some nearby retail establishments.

Normally, five or six miles-per-hour over the speed limit is not much of a factor in vehicle-on-vehicle collisions. That’s not fast enough to cause most drivers to lose control under most conditions. Furthermore, Florida passenger vehicles have steel cages and multiple restraint layers that can absorb the additional force.

In Port St. Lucie, speed increases both the risk of a collision and the force in that collision. A speeding driver has less time to react. Moreover, speed multiplies the force in a collision. That results in serious injuries like:

Pedestrians only have the right-of-way when they cross in marked crosswalks and with the light. If they cross the street in any other way, insurance company lawyers often claim that they “darted out” into traffic and the tortfeasors (negligent drivers) could not avoid a collision.

This version of events is usually a precursor to the sudden emergency defense. This doctrine excuses a tortfeasor’s liability in a crash if the driver:

Here in Florida, the first prong is usually present in these cases. But the second element is a different story. A jaywalking pedestrian may be unusual, but it is certainly not unexpected, especially if there is a high-traffic retail center nearby.

Drivers should be ready for things like pedestrians crossing against the light and stalled cars. These things are not “sudden emergencies” in this context. Therefore the defense is usually unavailable.