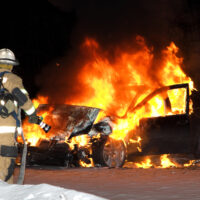 Two people are dead, and several others were injured, when an SUV rolled over around mile marker 165 on the Florida Turnpike.

According to the Florida Highway Patrol, a northbound driver lost control of his vehicle and went through a guardrail. The vehicle rolled over and eventually came to rest in a grassy area near the highway. Two passengers, a 35-year-old Silver Springs man and a 25-year-old Davie man, were killed almost instantly. The driver was seriously injured, as were two other passengers.

The two men killed were not wearing seat belts.

Most cars and trucks on the road only have one occupant. So, passenger injuries are rather uncommon. But when they happen, they are just as severe as driver injuries. And, from a legal standpoint, there are some additional complexities.

In a high-speed wreck, passengers are exposed to the same extreme forces as drivers. Some specific injuries include:

The medical bills alone from such injuries often exceed $100,000. Fortunately, a Port St. Lucie personal injury attorney can obtain financial compensation for these injuries. Compensation is typically available for noneconomic losses as well, such as loss of enjoyment in life, pain and suffering, and emotional distress.

Legally, passenger injuries sometimes involve the assumption of the risk defense. Victims are not eligible for compensation if they voluntarily assume a known risk. This doctrine is also related to the seat belt defense, which is outlined below.

People usually enter cars voluntarily. However, unless the victim witnesses reckless driving or another sign of an imminent crash, the risk of a collision is a theoretical one, as opposed to a known one.

There is a threshold issue as well. Many injured passengers do not want to file damages claims against people they know.

The Sunshine State is one of the only jurisdictions in the country that allows the seat belt defense. If the victim was not properly restrained, the insurance company could use that non-use to reduce or deny compensation.

However, to use this defense, insurance company lawyers must do much more than cite safety statistics and wag their fingers at victims.

Initially, the insurance company must convince the judge that the failure to wear a seat belt, as opposed to operator negligence, substantially caused the victim’s injuries. As mentioned above, the motion of a crash, as opposed to the impact, often causes the most serious injuries.

Next, the insurance company must convince jurors of the same thing. Frequently, medical evidence by itself is not very compelling. It lacks the human element, and that gives victim/plaintiffs an edge.

Reach Out to a Dedicated Lawyer