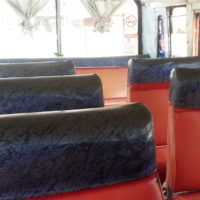 Largely because of an increase in traffic, the number of serious bus crashes has increased 20 percent since 2009. The bulk of these accidents involve intercity tour buses, and as outlined below, some special legal and factual issues often apply in these cases.

If they sustain serious injuries, bus crash victims are entitled to compensation for both medical bills and other economic losses, as well as pain and suffering and other noneconomic losses. Furthermore, because of the respondeat superior rule, the company which owns and/or operates the tour bus is usually responsible for these damages.

In negligence cases, the victim must establish negligence by a preponderance of the evidence, or “more likely than not.” If there are two equally-full glasses of water side by side, and someone adds an eyedropper full of liquid to the glass on the left, it has more water than the glass on the right. That’s the picture of preponderance of the evidence.

In traditional negligence cases, the victim must prove duty, breach, cause, proximate cause, and damages. But if the tortfeasor (negligent driver) violated a safety law, such as speeding or DUI, the victim only has to prove statutory violation and causation.

This duty applies on board the bus as well. This issue sometimes arises in cases involving party buses and other activities that involve passengers who are intoxicated, boisterous, or otherwise unruly. The bus company has a legal duty to protect passengers from the moment they board the vehicle to the moment they disembark. If the driver is unable to keep order, the company arguably has a responsibility to employ monitors or other individuals who can keep an eye on problem passengers, break up fights, and so on.

Fatigue is one of the leading causes of commercial bus crashes. Many tour buses, especially for day trips, arrive very early in the morning and depart late at night. Drivers are normally asleep in their beds during these hours, and they are naturally drowsy at these times, because of the body’s circadian rhythm. So, no matter how much rest they had the night before, these drivers are at risk.

This problem is particularly acute among shift workers, those who just changed work shifts, and older workers.

Even if the driver does not actually fall asleep, drowsiness can still cause a vehicle crash, because fatigue and alcohol affect the brain in roughly the same way. They both slow reaction times and make concentration very difficult. In fact, driving after eighteen consecutive waking hours is the equivalent of driving with a .08 BAC, which is above the legal limit in Florida.

Bus crash victims are often entitled to substantial compensation. For a free consultation with an experienced personal injury attorney in Port St. Lucie, contact Eighmie Law Firm, P.A. An attorney can connect victims with doctors, even if they have no insurance or money.