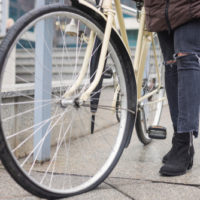 As Florida’s Hit and Run Awareness Month gets underway, a homeless man died in a hit-and-run crash. The story highlights the complex fact patterns in many of these cases.

A 67-year-old bicyclist was northbound on Northwest Green River Parkway near the Jensen Beach Boulevard intersection when an unknown driver hit him, killed him, and continued northbound. Using a witness’ account, officers located the abandoned vehicle nearby. Evidence found at the scene led investigators to a second suspect vehicle. Officers believe they have located the car’s owner but have not yet verified the driver’s identity. The victim, whose given address was inaccurate, had a rather long criminal history, according to reports.

Other bikers who often ride on Northwest Green River Parkway say that the area is inherently unsafe for bicyclists. “Anything that doesn’t have a bike path on, I won’t ride on,” said one. “I’ll do a sidewalk instead of the road any time because people just don’t pay attention.”

About half of hit-and-run tortfeasors (negligent drivers) are located and convicted in criminal court. In that forum, prosecutors must establish guilt beyond a reasonable doubt. Unless there was an eyewitness who saw the entire crash and also saw who was behind the wheel, there may always be a reasonable doubt as to the driver’s identity, so these cases aren’t brought very often.

Police officers performed a very thorough investigation into this accident. Unfortunately, that’s not always the case. After all, first responders care almost nothing about liability in a civil case. So, many times, attorneys must gather evidence on their own. That involves activities like:

Many jurors harbor either a general animus against bicycle riders, a phenomenon known as “bikelash,” or a specific prejudice against an individual victim. Attorneys must work extra hard in these cases to make the victim as sympathetic as possible, in order to obtain maximum compensation.