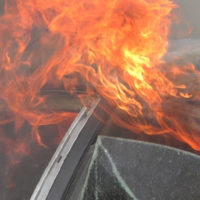 One person is dead following a predawn crash at a rest stop on southbound Interstate 95.

The wreck occurred near Mile Marker 132, not far from the Orange Avenue exit. According to the Florida Highway Patrol, a motorist entered the rest area parking lot shortly before 5 a.m. and then somehow lost control of the vehicle. The car hit a sign, careened into a parked tractor trailer, and exploded into a fireball. The motorist was declared dead at the scene.

Authorities are not sure if the truck was parked legally or illegally.

Given the time of the above crash (approximately 4:50 a.m.), the location (a highway rest stop), and the erratic driving, it is reasonable to assume that the driver was dangerously fatigued. If so, this crash is one of over 100,000 serious injury crashes in the United States that are related to fatigued driving. Authorities suspect that figure may be vastly underreported, as there is no “Breathalyzer” test for drowsiness.

However, fatigue and alcohol have similar effects on the brain. Although many motorists would not even think about driving after two or three drinks, they have no compunction about driving after being awake for more than eighteen straight hours. Both these motorists have roughly the same level of impairment in terms of diminished motor skills, inability to concentrate, and impaired judgment.

Other common breaches of duty include:

Given the fact in the above story, fault is far from certain, because the fatigue angle is only a theory that happens to fit the facts. If the truck driver was parked illegally, the shipping company may be responsible for damages, due to the respondeat superior (“let the master answer”) rule. Liability attaches to a shipping company or other employer if:

Third party liability is often important because many Florida driver are uninsured or underinsured, so victims need an additional source of recovery.

If the jury determines that both parties were partially at fault, the judge apportions damages based on the percentage of fault. For example, if the jury concluded that the victim was 50 percent at fault, the tortfeasor must pay 50 percent of the damage total.

For prompt assistance from an experienced personal injury lawyer in Port St. Lucie, contact Eighmie Law Firm, P.A. today, because you have a limited amount of time to act.