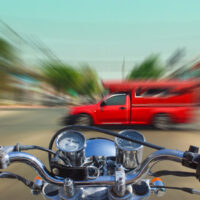 A driver making a left turn against traffic pulled directly into an oncoming motorcycle’s path, killing the rider almost instantly.

According to Port St. Lucie police, this wreck occurred near the intersection of Southwest Darwin and Southwest Port St. Lucie Boulevards. A southbound motorist turned into the path of a northbound motorcycle rider. The rider, who could not avoid the crash, died at the scene.

No further details were available.

Compared to four-wheel vehicle occupants, motorcycle riders are much more likely to die in crashes, even in relatively low-speed collisions. Multiple restraint layers, like airbags and seat belts, usually protect vehicle occupants. But motorcyclists are almost completely exposed to injuries like:

If the victim did not survive, these cases are a bit different, from a procedural standpoint. Survivors are able to obtain similar compensation, either directly or indirectly under a theory like negligent infliction of emotional distress.

Legally, a left-turn crash usually involves the negligence per se rule or the ordinary negligence doctrine.

Negligence per se is the violation of a safety law, which in this case is failure to yield the right of way. In Florida, tortfeasors (negligent drivers) are presumptively liable for damages if:

Additional evidence of negligence includes things like the tortfeasor’s speed prior to the crash and statements the tortfeasor made after the crash, like “I didn’t see you coming.”

Frequently, however, emergency responders do not issue citations in these cases. Many police officers see car wrecks as civil disputes, and they do not want to get involved. These victim/plaintiffs can use the ordinary negligence doctrine to obtain compensation.

Essentially, ordinary negligence is a lack of reasonable care. If the tortfeasor’s conduct fell below this standard, and that lack of care substantially caused injury, the tortfeasor is liable for damages.