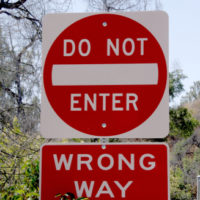 Two teenagers are dead after a wrong-way crash on a dark and dangerous section of Okeechobee Road near Midway Road.

Two travelers from Michigan were traveling westbound on the eastbound side of State Road 70. Both of them apparently knew that the recreational vehicle’s headlights weren’t working properly, as one reported that they were on the way to Port Charlotte in order “to have that issue addressed.” As they approached the Midway Road intersection, two teenagers were also in the eastbound lane. They apparently did not see the dark oncoming vehicle “until it was too late,” according to investigators.

The two RV occupants were both transported to nearby hospitals; the two teenagers in the other car died almost instantly.

Most Florida vehicle collisions involve one of three types of negligence, and the above story arguably features all three categories.

Operational negligence is essentially a failure to follow “the rules of the road.” All drivers have been careless in this area at least once, although this carelessness often does not injure someone else. Some common infractions include:

The negligence per se shortcut almost always applies in operational negligence cases. For example, driving on the left side of the road violates Section 316.081 of the Florida Statutes. In negligence per se cases, victims essentially only need to prove causation, or a connection between the legal violation and the damages suffered.

Behavioral negligence cases often involve punitive damages. These additional damages are available if the tortfeasor intentionally disregarded a known risk and recklessly endanger the safety or property of other people. In the above case, the tortfeasor not only knew there was a problem with the headlights, but also chose to drive at night. Assuming the victim/plaintiff establishes recklessness by clear and convincing evidence, punitive damages may well be appropriate.

The negligence per se shortcut is technically available in many of these cases. For example, Florida’s speeding law makes it illegal to drive at an unsafe speed, even if that velocity is not necessarily above the posted speed limit. But negligence per se is rather difficult to prove in these instances, so it’s often easier to proceed with a standard five-element negligence case.

Negligent drivers are responsible for the damages they cause. For a free consultation with an experienced personal injury attorney in Port St. Lucie, contact Eighmie Law Firm, P.A. We do not charge upfront legal fees in negligence cases.