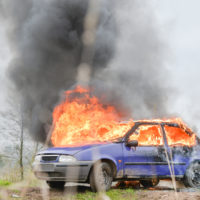 Three people were seriously injured when a pickup driver, who may have had a medical episode, rear-ended a van, and the vehicles caught fire. Moments before the flames erupted out of control, several bystanders pulled the injured parties from the wreckage, and according to Port St. Lucie Police spokesperson, the injuries “could have been a lot worse had they not stopped to help.”

The wreck occurred at the intersection of Southwest Tunis Avenue and Southwest Port St. Lucie Boulevard. A Chevrolet Colorado, whose operator had apparently lost consciousness in the moments before the impact, rear-ended a passenger van that was stopped at the intersection. The bystanders, including a nurse at a local hospital, decided to remove the victims from the van and truck. Although seriously injured, they are all expected to recover.

One Good Samaritan mused that the victims “could have burned to death” if the five people had not intervened.

If a tortfeasor (negligent driver) causes a wreck because of a momentary lapse of judgment or a one-time error, it is difficult to convince many jurors that the tortfeasor is liable for damages. On the other hand, if a tortfeasor causes a wreck after knowingly getting behind the wheel when the person should have known such behavior was dangerous, liability is easier to establish in the minds of most jurors.

Drivers with adverse medical conditions fall squarely into the latter category. These people are fully aware, for the most part, that they have epilepsy, heart problems, or other conditions which can cause loss of consciousness, yet they decide to put themselves first and drive anyway. The same can be said for persons who violate drivers’ license restrictions and drive without their glasses, on the highway, at night, or ignore other limitations.

Drunk driving and fatigued driving are also examples of pre-operational negligence. These tortfeasors generally know that they are too impaired or too sleepy to drive, yet they disregard the safety of other people on the road and drive anyway.

Many people have questions about Florida’s Good Samaritan law. Medical professionals, including nurses, are generally immune from liability in emergency situations based on either their actions or inactions. So, these individuals cannot be sued if they see a need and fail to respond.

Similarly, these individuals cannot be sued if they render assistance and thereby make the situation worse. Moving a car crash victim could make things worse, if the victim has a serious spinal or other injury. To be liable for damages, the medical professional must act with reckless disregard. So for example, if a nurse sees bones protruding from the skin or the victim says “I think my back is broken” and yet the nurse moves the victim anyway, the nurse may be liable for damages.

Non-medical professionals do not have this same level of immunity.

Rear-end collisions sometimes involve the last clear chance defense, because the insurance company often claims that the victim saw the tortfeasor approaching at a high speed yet did nothing to avoid the collision.

But “last clear chance” is not synonymous with “any possible chance.” Many times, the victim is unable to elude the tortfeasor due to traffic or other conditions, and in these cases, the defense does not apply.

Divers who ignore known risks are the most dangerous drivers on the road. For a free consultation with an experienced personal injury attorney in Port St. Lucie, contact Eighmie Law Firm, P.A. After-hours appointments are available.