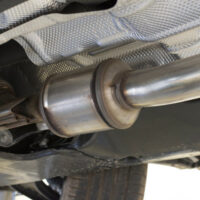 How were the suspects caught?

They were driving behind a business looking fairly out of place when they were approached by police who asked them what they were doing. The vehicle’s passenger was completely covered in mud and sweating profusely. While questioning the individuals, police noticed a catalytic converter. They then found 12 more. Eight of the catalytic converters had been stolen from a local pet shop. The men have been charged with 13 counts of burglary to a vehicle, grand theft, and criminal mischief.

Burglaries can be charged as either first-, second-, or third-degree felonies. In cases where there is no assault or battery, burglary is generally charged as a third-degree felony with a potential 5 year sentence. However, every catalytic converter equals one burglary charge. So the numbers will work against the defendants in this case.

Eighmie Law Firm represents those who have been charged with crimes in Port St. Lucie. Call our Port St. Lucie criminal lawyers today to schedule a free consultation and learn more about how we can help.