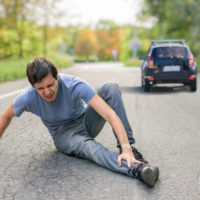 Authorities arrested a 69-year-old man and charged him with leaving the scene of an earlier fatal pedestrian collision.

The man supposedly came home and told his roommate that he thought he hit someone or something. When the man refused to call police, the roommate called police and relayed the conversation to officers. Investigators later determined that the man’s vehicle had damage consistent with an earlier hit-and-run. That incident killed a 31-year-old man who was walking near a roadway at night.

The arrestee said his roommate was “throwing me under the bus.”

Some people may remember the O.J. Simpson murder trial in the 1990s. A criminal jury declared him not guilty. Then, a few months later, a civil jury heard essentially the same evidence and reached the opposite conclusion. That’s primarily because the burden of proof in civil cases is only a preponderance of the evidence (more likely than not). But the burden of proof in criminal cases is beyond a reasonable doubt, which is a much higher standard.

Florida law defines reasonable doubt as an “abiding conviction” of guilt which is greater than any “possible doubt, a speculative, imaginary or forced doubt.” These jury instructions may or may not help jurors understand what reasonable doubt is, but either way, the law is the law.

In plain English, the evidence must be so overwhelming that, even after the defendant challenges the evidence and presents alternative theories, the jurors are still just as convinced as they were before about the defendant’s guilt.

Because of this high standard of proof, prosecutors need lots of evidence in criminal cases. They often look to statements that the defendant made to non-police officers while they were not under arrest.

Are Statements to Third Parties Admissible in Florida Criminal Court?

Most people who have seen a cop or lawyer TV show or movie know that if you say anything to officers, your statements are admissible in court. But what about things that defendants say to other people outside of official police interrogations?

Generally, such hearsay statements are inadmissible. Witnesses can only testify about events they personally witnessed, and not about things that other people told them or things they read. But there are a number of exceptions to the hearsay rule, including:

Other hearsay exceptions include the business records exception, which usually applies to medical records, and the prior court judgement exception.

In a criminal case, you need an aggressive attorney to protect your rights. For a free consultation with an experienced criminal defense attorney in Port St. Lucie, contact Eighmie Law Firm, P.A. Home and jail visits are available.