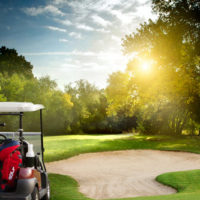 An 8-year-old boy sustained a serious head injury after a pedestrian-vehicle crash in Thomasville; the vehicle in question was a golf cart, and the tortfeasor (negligent driver) was an 11-year-old girl.

Authorities report that the crash occurred on Oak Trace Drive. The girl apparently knocked the boy over with the golf cart, then proceeded to run over him as well. The young man was rushed to a Tallahassee hospital with serious injuries.

The boy reportedly ran into the golf cart’s path.

People of all ages have the same duty of care, because legal responsibility is objective. So, a teen driver who just received her license yesterday has the same duty of care as her father, even though the girl has probably driven less than 100 miles in her lifetime while her father probably has several hundred thousand miles under his belt.

Furthermore, under Florida law, parents are responsible for the negligent acts of their children, since there is a special relationship between parents and children.

When young children operate motor vehicles, they are subject to an adult duty of care, because operating a motor vehicle is an adult activity.

About 1.7 million people sustain a traumatic brain injury each year, and motor vehicle crashes are one of the leading causes of these wounds. Pedestrians are particularly susceptible to head injuries, since they are completely exposed to danger and have the benefit of neither a helmet nor a restraint system.

Brain injuries are permanent, because dead brain cells do not regenerate. Aggressive physical therapy is the best treatment, because uninjured parts of the brain usually learn to assume the lost functions.

In pedestrian injury cases, insurance company lawyers usually say that the victim “darted out” or “ran out” in front of the vehicle and the driver could not possibly avoid a collision. This approach is a variation of the sudden emergency defense, which holds that tortfeasors are not liable for the damages they cause if:

Drivers of all ages and vehicles have a duty of reasonable care. For a free consultation with an experienced personal injury lawyer in Port St. Lucie, contact Eighmie Law Firm, P.A. We do not charge upfront legal fees in negligence cases.