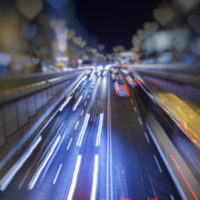 A woman is dead after her van drifted over the center line and smashed into a tractor-trailer which was travelling in the opposite direction.

The wreck occurred on Glades Cutoff Road just west of Interstate 95. According to police, a northbound Ford cargo van edged over the center line and moved directly into the path of a southbound Kenwood semi-truck. The Ford wedged underneath the Kenwood, and the Ford burst into flames. The Okeechobee woman who was driving the van died at the scene.

Police are still investigating the crash.

Liability is very difficult to establish in head-on collisions. The initial evidence is often misleading, and the legal issues are very complex.

In fatal accident situations, emergency responders almost always prepare written reports. Many times, these reports are one of the most important pieces of evidence in a negligence claim. But that’s not always the case.

Even the most experienced emergency responder is not an accident reconstruction expert. Instead, first responders normally base their conclusions on the available evidence, which is usually quite limited. Moreover, if the victim was seriously injured or killed, the accident report only includes one side of the story.

Since the victim/plaintiff has the burden of proof, a Port St. Lucie personal injury attorney usually must collect additional evidence. Especially in head-on wrecks, the Event Data Recorder is a good place to start. Most EDRs collect data like:

This electronic evidence helps an attorney re-create the accident and paint a compelling picture for the jury.

Fast action alone is not enough. Florida has very strong vehicle data privacy laws. So, attorneys usually need court orders to access EDRs. Furthermore, these devices are very sophisticated. A lawyer needs a lot more than a screwdriver and a laptop to download and use EDR information.

So much for some factual aspects of head-on crashes. Now, onto some legal aspects, specifically the last clear chance defense.

Assume Ben drifts over the center line. Sally sees Ben coming, but she does nothing. If Sally had a reasonable opportunity to avoid the crash, perhaps by changing lanes, Sally would probably be legally responsible for damages, even though she violated no traffic laws.

Many highway head-on wrecks involve the last clear chance defense. A large median often separates the opposite traffic lanes, so in many cases, drivers have a chance to avoid the crash, especially if traffic is light and the weather is good.

Head-on crashes are usually not as simple as they seem. For a free consultation with an experienced Port St. Lucie car accident attorney, contact Eighmie Law Firm, P.A. You have a limited amount of time to act.