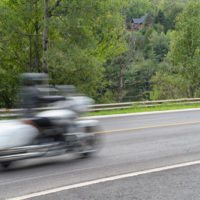 After Lauderhill Police officers joined the chase of two juvenile auto theft suspects, one officer hit a Harley Davidson, causing the rider to spin out of control.

The chase began when Boca Raton police alerted Lauderhill police to “be on the lookout” for two teenagers who had allegedly stolen a vehicle. Officers eventually located the children on Interstate 95, where they fled from pursuing officers. During the pursuit, a Lauderhill police officer changed lanes without signalling, pulling directly into the path of a trailing motorcycle. The bike overturned several times before finally coming to rest on a median. Emergency responders rushed the 47-year-old man to a nearby hospital, where he was later declared dead.

In the 1990s, the Department of Justice noted that high-speed police chases endanger more innocent civilians than shootings and all other police activities. Yet these incidents continue to kill or seriously injure hundreds of people each year. That’s more victims than tornadoes, hurricanes, floods, and all other natural disasters put together.

Publically, police officers justify high-speed chases with their mandate to evenly enforce the laws. They rightly contend that they cannot selectively enforce certain laws by capturing some suspects and letting others go free.

Off the record, however, police officers usually admit that the adrenaline rush which comes from “getting the bad guy” is too much to pass up. As a result, high-speed chases continue, even though technological and other advances have largely rendered them obsolete.

Most drivers have a duty of reasonable care. They must obey the rules of the road and drive defensively. Obviously, police officers have considerable immunity in this area. However, that immunity is not absolute. Because of official immunity, victims cannot file claims against police officers for acts of ordinary negligence, such as speeding or running a red light. However, a Port St. Lucie personal injury attorney may be able to  obtain compensation in the following situations:

The other type of immunity, discretionary immunity, usually does not apply in these situations either. Discretionary immunity, which is a form of sovereign immunity, gives decisionmakers immunity from legal action. For example, taxpayers cannot sue the government for tax increases. Safely operating a vehicle is not a discretionary act. So, the police department is liable for high-speed chase damages, according to the respondeat superior rule.

Partner with a Dedicated Lawyer

Police officers may be legally responsible if they cause injuries during high speed chases. For a free consultation with an experienced Port St. Lucie personal injury lawyer, contact Eighmie Law Firm, P.A. Home and hospital visits are available.