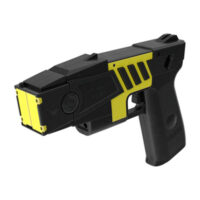 Police say that the man was on a dirt bike doing tricks when they attempted to detain him. Instead, the man took off but eventually stopped for gas where police caught up with him. At that point, a physical confrontation ensued which resulted in the drawing of a taser. However, the suspect was still pumping gas and the cover had yet to be placed on the gas tank. Further, the police knocked over the dirt bike while attempting to subdue the suspect resulting in gas spilling on the ground.

At this point, an officer yelled, “kill the pump, kill the pump!” The officer who has been charged with a misdemeanor retrieved the taser from a puddle of gasoline and then attempted to use it. This resulted in a massive fireball that severely injured the suspect and two other officers at the scene.

According to attorneys representing the defendant, he has spent the last 10 weeks in the hospital and will likely be placed into a medically-induced coma to ride out the pain. He has burns to 75% of his body and his quality of life has been greatly reduced. Nonetheless, the defendant could still face charges for resisting arrest, fleeing law enforcement, and reckless driving.

Police say that the defendant was with a group of bikers who were driving recklessly and failing to obey traffic laws. They had the defendant on helicopter feed blowing through several red lights. Residents in the area claimed that the bikers were creating a disturbance and one of them had a gun. When police attempted to pull the defendant over, they say he sped off, joined a group of other bikers, and attempted to hide himself in the crowd. Nonetheless, a helicopter was able to keep track of him and police were called to the gas station where he nonchalantly began filling up his bike.

Does it matter that he was already punished?

Yes. While the police could still pursue criminal charges against the defendant for his conduct, the court will weigh the fact that the suspect’s life has been forever changed due to the conduct of one negligent police officer. Ultimately, the court will consider the outcome of this arrest during sentencing. The individual could have easily been subdued without the use of a taser, so in this case, the force was excessive. So while a finding of guilt remains likely, the defendant has paid dearly for his crime.

Eighmie Law Firm handles criminal traffic infractions such as DUI, reckless driving, and leaving the scene of an accident. Call our Port St. Lucie criminal lawyers today to schedule a free consultation and learn more about how we can help.