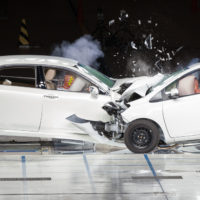 Authorities say a man was running across a congested portion of Gatlin Boulevard when a vehicle fatally struck him.

Few details were available, except that the wreck occurred near the intersection of Gatlin and Southwest Ed Grace Street. First responders rushed the victim to a nearby hospital, where he underwent emergency surgery.

The victim in this story may not feel lucky, but he was lucky. Individuals in these situations rarely survive their injuries, because fast-moving cars almost always kill pedestrians. At 20mph, the victim fatality rate is less than 10 percent. But the death rate skyrockets to 90 percent at 40mph.

Since pedestrians have no restraint systems or other safety layers to protect them from oncoming vehicles, they nearly always sustain serious or fatal injuries, such as:

Your Claim for Damages in St. Lucie County

Florida law gives pedestrians the right-of-way if they are inside a crosswalk and have the green light. If tortfeasors (negligent drivers) hit pedestrians in these situations, the tortfeasor may be liable for the damages set forth above.

But most of these accidents occur outside marked crosswalks. Fortunately, victims may also be entitled to compensation in these cases. Victim/plaintiffs must establish that the tortfeasor was negligent. Ordinary negligence is basically a lack of reasonable care. Driver impairments, like alcohol use, excessive fatigue, and distracted driving, are usually evidence of negligence.

Typically, contributory negligence is one of the most common defenses in Florida. This legal loophole shifts blame for the accident from the tortfeasor to the victim. However, this doctrine usually does not apply in vehicle-on-pedestrian claims. It is almost physically impossible for any pedestrian to cause any car crash.

After a collision, most tortfeasors immediately pull over, if they can, and remain at the scene. These are reasonable reactions. But a jaywalking pedestrian is usually not a “sudden emergency.” Instead, jaywalking pedestrians are more like stalled cars or construction zone lane changes. Drivers should be ready to respond to these situations, so they are not sudden emergencies in this context.

Pedestrian victims may be entitled to substantial compensation for their serious injuries. For a free consultation with an experienced Port St. Lucie personal injury attorney, contact Eighmie Law Firm, P.A. We routinely handle matters throughout the Treasure Coast area