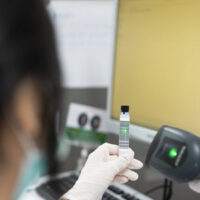 A Western Michigan University student reported that a Port. St. Lucie man sexually assaulted her in her dorm room in 2010. Since then, several more women have stepped forward to report similar experiences with the same perpetrator. The allegations all appear to have occurred between 2009 and 2014. The 2010 case had gone cold, but it appears DNA evidence linked the man, who was living in Port St. Lucie, to the 2010 sexual assault. He was a WMU student at the time of the assault. The defendant was extradited to Michigan to stand trial, which is now underway. If convicted, he could spend the rest of his life in prison.

The charges were announced in conjunction with the efforts of the Sexual Assault Kit Initiative. It was broadly reported several years ago that rape kits were sitting on shelves in police evidence lockers untested. Today, more effort is being placed into analyzing these kits and bringing justice to the victims. Below, we’ll discuss the efforts and how the investigations are being conducted.

What is the Sexual Assault Kit Initiative?

Public pressure on behalf of sexual assault victims resulted in a 2016 initiative in Michigan to get the rape kits tested. Statewide, officials had uncovered more than 3,500 rape kits that had never been tested. Some of these rape kits dated back decades. The SAKI program resulted in the delayed arrest of a man accused of multiple sexual assaults.

What’s going on in Florida?

In 2016, Florida enacted a similar program as sexual assault kits from across the state were still waiting to be tested. The directive required all Florida police departments to identify untested sexual assault kits. A survey was conducted and each department was required to submit a plan to have the kits tested. The project was completed in 2019. Over 8,000 kits were tested and these kits resulted in 1,814 CODIS hits. CODIS is a national database of crime scene DNA.

Is DNA evidence enough to get a conviction?

No, not exactly. DNA evidence, depending on its quality, can be quite damning, but it only whittles the pool down to a handful of people. Exact testing is sometimes available, but not always. In these cases, investigators will research the pool of suspects that DNA provides them and look for opportunity and access, witness statements, and other corroborating evidence. DNA evidence is much more useful for exonerating a suspect than it is for convicting a suspect—at least on its own. Once a suspect has been identified, DNA evidence can be the nail in their coffin or link them to multiple other crimes. But police generally also need circumstantial evidence to prove that a family member did not commit the crime.

So, in a case like the one mentioned above, the DNA evidence helped track down the victim, but the prosecution will present more than simply DNA evidence to prove the crime. They will provide witness testimony and establish that the defendant had access to the victim. Combined, this makes for a strong prosecution.

Scientific evidence isn’t perfect like it is on television. If you’ve been charged with a serious crime, you need a law firm capable of analyzing scientific evidence for flaws. Call the Port St. Lucie criminal lawyers at Eighmie Law Firm today to schedule an appointment and we can begin preparing your defense immediately.