Protesting vs. Rioting in Florida 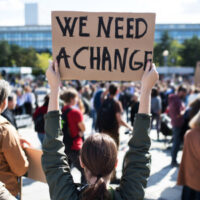 The country is currently in a state of protest, and it has extended to Florida as well. Protestors are flooding the streets fighting against police misconduct, civil injustice, and the results of the Presidential election. The protesting has made international headlines, as has the rioting that sometimes erupts. Footage on the news is sometimes even filled with people being led off by the police in handcuffs. So, what is the difference between protesting and rioting in the state of Florida, and when might a person face criminal charges?

The First Amendment to the Constitution gives all Americans the right to peacefully protest in the United States. The purpose of protests is to give citizens the chance to allow their voices to be heard when they disagree with certain topics and these gatherings are usually politically based.

While the First Amendment does protect a person’s right to protest, it is important to understand that it only protects peaceful protests. Most of the protesting that has been done around the country has largely been peaceful, but there have been times when it has turned into rioting.

A protest turns into a riot any time the people involved destroy property or use weapons that are used to kill or injure another person. Unlike protesting, rioting is not protected by the First Amendment. Any time law enforcement determines that a protest has turned into a riot, they have the right to detain the person or people involved for becoming violent or civilly disobedient. In the worst of cases, a person may face charges of criminal mischief, arson, or worse.

It is sometimes difficult to determine when a protest has turned into a riot. A large crowd of protestors may result in people becoming trampled and injured, but that does not necessarily mean it has turned into a riot if the act was unintentional. All protests, however, have the potential to turn into riots. Law enforcement may also determine that a riot has erupted, even when one has not. In these instances, innocent people may be arrested and face criminal charges, even when they have not done anything wrong. When this is the case, it is critical that anyone accused speaks to a Florida criminal defense lawyer that can help.

At Eighmie Law Firm, P.A., our experienced Port St. Lucie criminal lawyers understand that no one deserves to be arrested for exercising their peaceful right to protest. If you have been involved in a protest and are now facing charges, call us at (772) 905-8692 or contact us online to schedule a consultation and to learn more about the defenses available for your case.