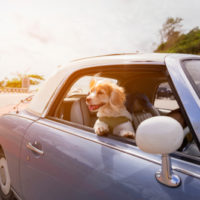 A serious collision on Interstate 95 almost claimed the lives of several people and a small dog.

The wreck happened near the Okeechobee Road interchange on the northbound side of the freeway. Details are sketchy, but apparently two cars collided in the center lanes, perhaps because one made an illegal lane change. Before first responders arrived, a young puppy apparently fled from one of the wrecked vehicles. An alert bystander returned the animal to its grateful owners.

None of the names were released.

The above story had a happy ending as far as the family dog was concerned. But many such incidents end badly. People usually recover from serious trauma injuries given time and treatment. But even moderate injuries are often fatal to small dogs, cats, and other pets.

Additionally, in many car crash cases, uninjured or moderately-injured pets become disoriented and wander off. The same thing sometimes happens with regard to repair crews and household pets. For example, a refrigerator repairman may unintentionally allow a dog to run out the door.

If the victim was a person, substantial compensation may be available if the other driver was negligent. But if the victim was a dog, such compensation is usually not available, even if the tortfeasor (negligent driver) was extremely careless. Florida law considers pets to be property. Although their emotional value is often almost like that of a family member, the law simply does not recognize this value.

Personal injury damages for dogs are available, but Port St. Lucie judges usually cap these damages at the dog’s economic value. In many cases, that value is negligible or even nonexistent. Sometimes, when considering the amount of damages, judges consider the income value as opposed to the financial value. But this exception only applies to stage cats, show dogs, and other such revenue-producing animals.

However, there may be a back door to fair compensation in these cases. Florida is one of the few states which allow claims for negligent infliction of emotional distress. The same damage limitation rules do not apply in NIED cases. The elements of these claims are:

These cases are quite difficult to prove. However, an experienced attorney can usually establish a prima facie case in court.

This defense makes NEID, and other negligence cases, difficult to establish in Florida. Most pet owners agree that their dogs should be restrained while they’re in cars. Yet most pet owners also admit that they allow their dogs to ride unrestrained in vehicles.

Such behavior gives rise to the contributory negligence defense. Much like human victims who do not wear seat belts, the Florida insurance company can argue that the pet’s injuries would have been negligible if the pet were properly restrained. Generally, the insurance company must produce an expert witness to establish the defense. Many Port St. Lucie insurance companies would rather settle the claim than go to that expense and trouble.

Florida is a pure comparative fault state. Even if the victim/plaintiff is 90 percent responsible for the injuries, the victim is still entitled to a proportional share of damages.

Pets do not count as much as people, at least as far as the law is concerned and in most cases. For a free consultation with an experienced personal injury attorney in Port St. Lucie, contact Eighmie Law Firm, P.A. We routinely handle cases throughout the Treasure Coast area.