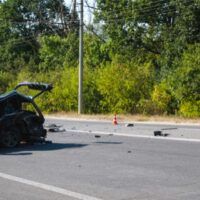 Investigators say that objects in the road started a chain-reaction crash which ended in the death of a 33-year-old man.

Few details were available about the wreck, which occurred on southbound Interstate 95 in Boynton Beach. Several vehicles swerved to avoid debris in the roadway. One of those vehicles struck and killed the victim.

For the most part, cars are much safer today than they were twenty years ago. However, car wrecks still kill or seriously injure millions of Americans every year. Some serious injuries include:

Given the extent of these injuries, it’s not surprising that the medical bills after a serious crash often exceed $100,000. Compensation is available for these economic losses, along with lost wages, property damage, and other such items.

Additionally, if the victim sustained a serious injury, additional compensation for noneconomic losses might be available. This category includes things like pain and suffering, loss of enjoyment in life, emotional distress, and loss of consortium (companionship). To determine a fair amount of noneconomic losses, Port St. Lucie personal injury attorneys often multiply the economic losses by two, three, or four, depending on the facts of the case.

Florida’s definition of a “serious injury” is rather complex. Essentially, if the car was not drivable after the accident, the victim probably sustained a serious injury.

Building a Claim for Damages

Successful compensation claims usually start with evidence, like medical bills and the police accident report. Evidence like this helps victim/plaintiffs establish negligence by a preponderance of the evidence (more likely than not).

Sometimes, however, these items are not enough. For example, the police report is often incomplete or inaccurate. A lack of evidence could hamstring a case for fair compensation. Therefore, attorneys often need additional evidence, such as a car’s Event Data Recorder or nearby video surveillance footage.

If an attorney gathers enough evidence, the claim will probably settle out of court and on victim-friendly terms.

Collecting evidence is not enough. Car crash evidence is like the pieces of a jigsaw puzzle. An attorney must put the pieces together and present a compelling picture to the jury.

Additionally, insurance companies do not simply write checks without putting up a fight. Instead, they frequently look for legal loopholes which deny or reduce the victim’s compensation. Sudden emergency is one such loophole. This doctrine excuses negligent conduct if the tortfeasor (negligent driver):

Debris in the road is certainly unusual, but it might not qualify as a sudden emergency in this context. Instead, Florida law usually limits sudden emergencies to lightning strikes, hood fly-ups, and other completely unexpected situations.