Should I Take A Field Sobriety Test In Florida? 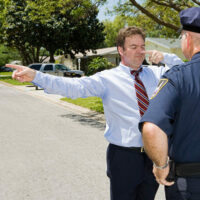 A recent DUI charge involving an out-of-state drug treatment counselor explains why this is not a good idea. The drug treatment counselor was driving while checking out the night sky after a SpaceX launch. A police officer thought he was “failing to maintain a lane” and then pulled him over. When he explained what he was doing, they didn’t believe him. They forced him to take a field sobriety test, failed him, and charged him with DUI. When his chemical tests came back negative, the charges were dropped. However, it’s very important to understand that the only function of field sobriety tests is to give police officers probable cause to arrest you. They have no merit beyond that function.

Why are field sobriety tests so useless?

In clinical settings, doctors administering these tests to individuals who had agreed to be studied found that the tests produced a better than 50% accuracy rating. One test, the horizontal gaze nystagmus, tested over 80%. However, police officers are not doctors and you are not someone who agreed to get wasted in a lab for a test. Police officers are biased against those they pull over meaning they are more likely to see an intoxicated person than a sober person. Further, you have not agreed to be in an experience where you’re allowed to get wasted. Rather, your future is on the line. In other words, the stakes are much higher for you than they would be for someone under observation in a lab. For that reason, the science beyond the tests is inconclusive and the data is functionally worthless. No matter how many times the NHTSA stamps their feet and says their tests are valid, no reputable scientist would stand behind the conclusion that tests administered in a lab are analogous to tests administered in the field.

What should I do if a police officer demands a field sobriety test?

You should politely decline the request. Implied consent requires that you submit blood, breath, or urine if requested. However, you haven’t been arrested yet. Police need probable cause to initiate the arrest. By the time they’re asking for a field sobriety test, they don’t have it. Generally speaking, a valid DUI arrest will be supported by evidence of poor driving, not the failure of an individual to stand on one leg while avoiding looking at the horizon so they lose their balance. Evidence of poor driving gives the police officer probable cause to remove the driver from traffic. Evidence of not being able to stand on one leg while looking at your feet is evidence that millions of years of evolution have not provided us with that ability, your knee hurts, or you’re so scared that you’re shaking.

So, politely decline the request, don’t give police any more ammunition, and force them to use real evidence against you.

Before you take any test, call a skilled Port St. Lucie DUI lawyer today. Eighmie Law Firm, P.A. understands the stakes. Give us a call and we can begin preparing your defense immediately.