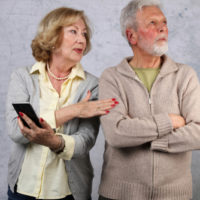 Among most age groups, the divorce rate has declined significantly since the 1990s. But the over-50 age group is one of the rare exceptions. In fact, the marriage dissolution rate has increased almost 110 percent among this age group, creating a phenomenon that many call “grey divorce.”

Several factors may be behind the increase. For one thing, divorce’s moral acceptability is at an all-time high. Couples who would never have considered marriage dissolution twenty years ago now may see divorce as a viable option in some cases. Moreover, lifespans are also at an all-time high. Today, a 55-year-old adult can reasonably expect to live another twenty years. Many of those years will be active years. That’s a long time to wait out a bad marriage.

When older couples get divorced, they often face issues which are much different than the ones their adult children face when they go through marriage dissolution in Florida.

Child custody itself is not an issue for almost all over-50 couples. But the emotional issues are still a factor. For many parents of this age, the season of celebration (graduations and weddings) is just getting started. A late-in-life divorce often changes the tenor at these gatherings. That’s especially true if receptions become more like chess matches, because Mom cannot be too close to Dad’s new wife.

There may be legal fallout as well. Many adult children try to “blame” one parent or the other for the divorce. Withholding grandchild visitation rights is a common weapon.

The parental presumption (a/k/a the “Father Knows Best” rule) is very strong in Florida. In 2015, the Legislature amended the grandparent visitation law. Grandparents now have a statutory right to contact with a grandchild if:

Even if the grandparent meets this initial burden, the grandparent must still establish that visitation is in the best interests of the child. This law is very narrow and may be unconstitutional under Supreme Court cases like Troxel v. Granville, but we shall see.

After they have been married many years, many couples have a rather high standard of living. The judge must divide property in such a way that the divorce is not an unfair financial burden on either party. Since it is easier for divorced men to re-accumulate wealth than divorced women, the wife may be entitled to a slightly larger share of property. In the alternative, the wife might be entitled to a slightly higher alimony award.

Also after a long marriage, property frequently becomes commingled. For example, Husband might use funds from his paycheck (marital property) to pay down student loan debt he acquired before the marriage (nonmarital property). In that case, Wife might be entitled to a share of the lost marital property.