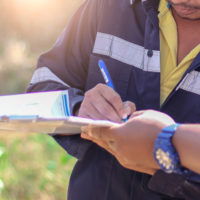 In most driving under the influence cases, the defendant provides a specimen of breath or blood for analysis. But in about 20 percent of these cases nationwide, the defendant refuses to provide such a sample. For some reason, the percentage is a little higher in Florida. That’s the main reason lawmakers recently added a refusal-to-submit law to the state statutes.

To obtain convictions in most of these cases, prosecutors must rely on the three approved field sobriety test results. A few cases are complete-refusal cases. These defendants exercise their rights to refuse a chemical test or perform tests. These cases are almost impossible for the state to win.

Even if the defendant performed the field tests, these tests are highly subjective and subject to challenge from an aggressive defense attorney.

In this test, which is also known as the heel-to-toe walk, the defendant must walk a straight line heel-to-toe for a certain number of steps (usually fifteen), then turn around and walk back heel-to-toe. During the test, officers look for a number of clues, such as:

There are so many possible clues that this test is basically designed for people to fail it. That’s especially true when considering that each step could be a clue.

Another problem with this test is that officers give no allowances. They expect a defendant who walks an imaginary line in the dark wearing flip-flops to perform just as well as a defendant walking an actual line in a well-lit room in sneakers. That’s not a realistic expectation.

Much like the WAT, the OLS is a divided attention test which measures both physical dexterity and mental acuity. Many observers believe that intoxicated people are incapable of multitasking in this way.

Also much like the WAT, the OLS is simply impossible for some people to perform. Overweight people have a hard time balancing on one foot for more than a few seconds. The same thing applies to individuals with any kind of mobility impairment.

The HGN is different from the other two. This test is strictly medical. Nystagmus is involuntary pupil movements at certain viewing angles. The easiest way to detect nystagmus is to have subjects track moving objects with their eyes without moving their heads.

But alcohol is not the leading cause of nystagmus. In fact, it is not even close to the leading cause. Childhood brain injuries and genetic abnormalities cause most nystagmus cases. Certain medications can also cause nystagmus. Officers are supposed to screen individuals who have these conditions. But they do not always do so and the screens are not always effective.

Furthermore, nystagmus is a clinical test. Roadside HGN tests do not occur under controlled conditions. It’s dark and squad car overhead lights usually flash in the distance. These variables may affect the results.

Prosecutors are often hard-pressed to establish guilt when they are limited to the FSTs. For a free consultation with an experienced criminal defense attorney in Port St. Lucie, contact Eighmie Law Firm, P.A. We routinely handle cases in St. Lucie County and nearby jurisdictions.