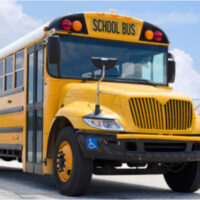 Few details were available about a wreck which involved a car and a St. Lucie Public School vehicle loaded with kids.

The wreck occurred in Fort Pierce, near the intersection of Avenue O and North U.S. 1, shortly before school began for the day. Ambulances arrived at the scene to transport the victims, according to St. Lucie County Fire District spokeswoman Brenda Stokes. Some of the injured children were immediately released, while some remained in local hospitals.

These drivers, along with Uber drivers, taxi drivers, and other commercial operators which carry passengers for money, are common carriers in Florida. These individuals have a higher duty of care.

Most noncommercial operators have a duty of reasonable care. They must drive defensively and obey the rules of the road. Common carriers, on the other hand, have a duty of highest care. They are virtually insurers of safe conduct from one place to the other.

This duty is not limited to driving. Common carriers also have a responsibility to keep passengers safe during transit. That’s why many Uber drivers insist that passengers buckle their seatbelts during trips. That’s also why many school busses have chaperones. These people break up petty fights before they become violent and prevent kids from acting disruptively and distracting the driver.

The enhanced duty of care make it easier for Port St. Lucie personal injury attorneys to establish liability in court. What might be a one-off accident if a noncommercial driver was behind the wheel might be negligent conduct when a common carrier is involved.

Driving behavior is another example. A noncommercial driver can usually drive through an intersection on a green light without stopping. But a common carrier arguably has a duty to stop, or at least pause, and look both ways before proceeding into the intersection.

These wrecks often involve complex issues, like contributory negligence. Essentially, there may be a difference between fault at the scene and liability for damages. So, regardless of who got the ticket in a car wreck, an attorney should always evaluate your claim.

Bus crashes, like the one in the above story, often involve multiple serious injuries to multiple victims. Frequently, the tortfeasor (negligent driver) does not have enough insurance to cover all these losses. Fortunately, the respondeat superior rule usually applies in bus crash cases. The company or agency which owned the bus is financially responsible for negligence damages if:

School bus claims are a bit tricky. Sometimes, the school district owns and operates the bus, and sometimes, the responsible entity is a private company.

Other vicarious liability theories include negligent entrustment and dram shop liability. Negligent entrustment holds some vehicle owners liable for damages if they loan their property to incompetent drivers. Florida’s dram shop law applies to restaurants, grocery stores, and other commercial alcohol providers who sell alcohol to people who cause car crashes.

Reach Out to an Assertive Lawyer

Florida law holds bus drivers to a higher standard. For a free consultation with an experienced Port St. Lucie personal injury lawyer, contact Eighmie Law Firm, P.A. Attorneys can connect victims with doctors, even if they have no money or insurance.