The Contributory Negligence Defense In Florida 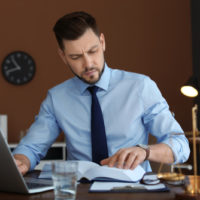 Multiple fault is one of the most common issues in Port St. Lucie car crashes. For example, one driver may be speeding as she approaches a curve, and another driver may fail to see her.

Florida is one of several pure comparative fault states. The judge divides damages strictly according to the percentage of fault. So, if the victim was 90 percent at fault for the collision, the victim is still entitled to a proportional share of damages. In contrast, neighboring Alabama is a pure contributory negligence state. So, if the victim is even 1 percent responsible for the crash, the victim receives no compensation.

Is A Contributory Negligence Instruction Appropriate?

It’s easy to forget that complex trials like Port St. Lucie car crashes are very confusing. After all, the litigants and their attorneys are very familiar with every aspect of the case. But the jurors know nothing about it until they sit in the jury box.

In a way, a trial is like watching the season finale of a TV show you have never seen before. It’s fairly easy to follow the major good guy vs. bad guy general outline. But all other characters and plot elements are a mystery.

To keep things as simple as possible, the judge decides what specific issues the jury must consider. So, before directing the jurors to consider a comparative fault issue, there must be sufficient evidence to warrant such a move.

This pretrial hearing is the victim/plaintiff’s first opportunity to defeat the contributory negligence defense. To return to the previous example, assume that the first driver was speeding only slightly. The victim/plaintiff’s lawyer could argue that the slight speeding isn’t enough to trigger the contributory negligence defense. In other words, there isn’t enough evidence to warrant the added complexity.

If the victim/plaintiff loses round one, round two occurs during the trial itself. To defeat a contributory negligence claim, sometimes it’s best to try the same argument with a different audience. To stay with the previous example, just because the Port St. Lucie judge thought that the driver was speeding too much, that doesn’t mean the jury would agree.

However, a better approach may be to accentuate the positive. Sometimes, an attorney can point out all the good things that the victim did while driving. If the jury believes the victim is a good driver, it may assign more blame for the crash to the defendant.

An attorney must tread carefully here. Evidence like this could be considered bolstering the witness, which is against the rules of evidence in most cases.

If it’s successful, the contributory negligence defense reduces the amount of compensation the plaintiff receives. For a free consultation with an experienced personal injury attorney in Port St. Lucie, contact Eighmie Law Firm, P.A. We do not charge upfront legal fees in negligence cases.