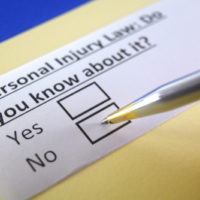 Florida’s auto insurance minimum requirement is one of the lowest in the country. Many drivers only have $10,000 in accident coverage. In a catastrophic injury case, like a wrongful death, that amount may not be nearly enough to provide fair compensation to the victim/plaintiff. There are options in this situation, such as attaching current assets or maybe even future earnings. These efforts are often successful, but they are also rather cumbersome.

A better approach is to find another defendant that is also financially responsible. If that defendant has rather “deep pockets,” that’s even better. So, vicarious liability plays an important role in many Florida car crash cases.

If the tortfeasor (negligent driver) was a taxi driver, truck driver, or Uber driver, respondeat superior (“let the master answer”) usually applies. As a bonus, these commercial drivers are typically common carriers in Florida. Since these individuals have a higher duty of care, it is often easier to establish liability against the tortfeasor.

Back to the damages question. This doctrine is the most widely-used employer liability theory. Respondeat superior has three basic elements:

Respondeat superior applies in most car accident cases. If the tort is an intentional one, such as assault, there are other theories, such as negligent hiring and negligent supervision.

Does Florida Have a Dram Shop Law?

So, there are two ways to establish third-party liability against a bar, restaurant, grocery store, or other commercial alcohol provider in Port St. Lucie:

Similar to respondeat superior, the accident must be a foreseeable result of the sale. In this context, it is foreseeable that a driver will open packaged alcohol, drink it on the way home, and become impaired.

Reach Out to Hard-Hitting Lawyers

The tortfeasor may not be the only party responsible for damages. For a free consultation with an experienced personal injury attorney in Port St. Lucie, contact Eighmie Law Firm, P.A. We have five area office locations.