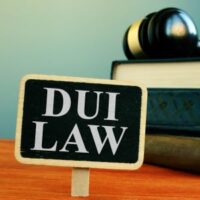 You can fill 20 textbooks just on DUI laws alone. The law is complicated even though it is among the most common offenses that Floridians will face. The penalty structure of the law penalizes those who cause accidents while under the influence much more harshly than those who do not. It also penalizes those who have multiple DUIs more harshly. In this article, we’ll take a look at Florida’s DUI laws and how they might apply to your case.

A simple DUI is when you’re driving along, commit some kind of traffic infraction, get pulled over, and the officer has cause to believe you’re under the influence. They conduct field sobriety or breathalyzer tests that show that your BAC is .08 or above (but below .15). They charge you with simple DUI. Simple DUI is a second-degree misdemeanor punishable by up to 6 months in county jail and a $500 fine. Most folks walk away with a slap on the wrist and admonishments by the court. Nonetheless, the incident remains on their record.

On the opposite end of the spectrum, DUI can be charged as a second-degree felony with a maximum penalty of 15 years, a recommended sentence of 10 years, and a mandatory minimum (that can only be invoked when there are extenuating circumstances) of 4 years.

So, how does a simple misdemeanor DUI end up costing someone 15 years of their life? The law makes room for several aggravating factors that can enhance the penalties of your DUI. These include:

In addition to the aforementioned aggravating factors, there may be mitigating factors that impact your case. For example, those who have committed their very first DUI without causing property damage or injury may be able to plead their case down to a “wet reckless”. The penalty structure for a wet reckless is slightly less than a DUI, but the main advantage is that you won’t have to surrender your license.

On the other hand, chances are good that if the prosecution is willing to offer a wet reckless, then they don’t have enough evidence to prove DUI in court. Your attorney will look over the charges to determine if errors were made in processing your DUI, tests were administered improperly, or other elements of the crime were not met.

The Port St. Lucie DUI attorneys at Eighmie Law Firm can help fight your DUI charge and get the charges either reduced or dismissed. Call today to schedule an appointment and allow us to begin preparing your defense immediately.