What to Do After a Bicycle Accident in Florida 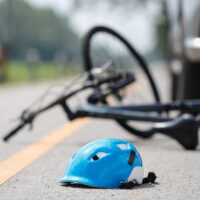 Florida is known as being one of the states with the most bicycle accidents every year. While bicycle accidents make up two percent of traffic fatalities around the country, they are approximately double that in Florida. Bicycle accidents are some of the scariest on Florida’s roads. They result in very serious injuries and afterwards, victims are often left confused and unsure about what to do. The actions you take after a crash are important and can help protect your claim. Below are the most important steps anyone should take after a bicycle accident.

The sooner you receive medical treatment for your injuries, the more it will strengthen your claim for damages. If your injuries are severe, call 911 and ask for them to send medical help immediately. If your injuries are not so severe they require roadside medical attention, visit an emergency room or other healthcare facility as soon as possible after you leave the scene.

A police report can indicate that a driver’s negligent actions caused your crash, which could help your claim. Police reports are generally not admissible in court, but they serve as very useful pieces of evidence when negotiating with the insurance company.

Even if you will recover from your injuries and want to get back out on your bicycle, do not get it fixed until your personal injury claim is closed. Preserving your bike in the same condition it was in immediately following the crash will allow you to prove the damage it sustained. You should also keep your bike in the same position it was in when you were hit until the police arrive. If doing so will create a hazard, take a picture of your bike before moving it.

The accident scene will contain other evidence that is important to your claim. Take pictures of the scene, your injuries, and the damage done to your bike and any vehicles. Also speak to eyewitnesses, if possible, and obtain their names and contact information.

Say as Little as Possible

There is a lot of time to talk about how the crash happened and who was at fault, but at the accident scene is not the place to do it. Say as little as possible to the negligent driver and do not blame for the crash, or accept blame for the accident.

Do Not Talk to the Insurance Company

Just as you should not say anything at the accident scene, you also should not speak to the insurance company. An adjuster may contact you shortly after the crash, perhaps even while you are in the hospital. Direct anyone that contacts you to your lawyer and do not say anything that could hurt your claim.

A Port St. Lucie personal injury lawyer will advise on the most important steps to take after a crash, and protect your claim every step of the way. If you have been hurt in a bicycle accident, call our experienced attorneys at Eighmie Law Firm, P.A. We know how to hold negligent drivers accountable for their actions and will give you the best chance of securing the fair settlement you deserve. Call us today at (772) 905-8692 or contact us online to schedule a consultation.