Why You Should Have a Premarital Agreement 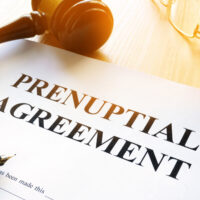 Divorce is a greater possibility today than it ever has been before. 73 percent of Americans believe that divorce is a morally acceptable way to end an unsatisfying marriage. Divorce often causes significant financial and emotional losses. So, just like it’s important to have flood insurance if you live on a flood plain, it’s important to have divorce insurance if you get married in the 21st century.

Premarital agreements are especially a good idea if either spouse has been married before. Some key benefits are outlined below.

Typically, marriages produce children. So, if you were married before, you probably have children from that relationship as well as stepchildren in your current relationship. If you were to die suddenly, inheritance and succession matters could be a jumbled legal mess.

In terms of Florida intestacy laws, divorce is basically the same thing as death. So, your biological children may have no inheritance rights whatsoever. As far as the law is concerned, they died in an accident and they no longer exist. That’s an extremely harsh result which may be completely out-of-step with your wishes.

A premarital agreement can restore those rights and also put everyone on the same page. So, you can include biological children in something like a family business succession plan.

Current stepchildren may not have any legal inheritance rights either. Living in the same house and sharing an emotional bond does not create a legal relationship. Once again, in terms of Florida intestacy laws, a stepchild is basically a roommate. If you die suddenly, your stepchild has no standing to pursue any sort of legal claim.

A premarital agreement, especially when combined with a will, stepparent adoption, or other document, gives you more control over the situation.

Financial conflicts are very common in marriages, no matter how much money the couple has. Essentially, some people are savers and some people are spenders. There’s nothing inherently wrong with either financial approach. But these two personality types mix like oil and water. Conflict is inevitable and usually ongoing.

A premarital agreement removes money from the equation so it never has a chance to come between the two spouses. This removal not only makes your relationship stronger. It is the heart of your insurance policy. Asset division is often the most painful and expensive portion of a marriage dissolution proceeding. The easier this part is, the less painful a divorce will be. And in the end, that’s normally what everyone wants.

Whether or not you have a premarital agreement, there will always be conflict in your marriage. But if you talked out your problems once before, and made an effort to understand the other spouse’s perspective, that technique will probably work again.

Additionally, premarital agreements do not need to be set in stone. Spouses can modify them at any time. As your family changes and your expectations change, the legal framework for a successful marriage can change as well.