Am I Eligible For A No-Fault Divorce In Florida? 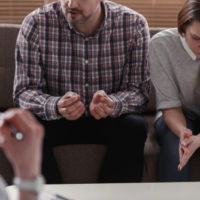 Before 1970, there was no such thing as a “no-fault” divorce in Florida or any other state. If a spouse wanted to dissolve a marriage, that spouse had to show evidence of adultery, cruelty, abandonment, or some other fault. Sometimes, this requirement was only a technicality. But too many times, it caused an already emotionally-charged event to be even more contentious and bitter.

California lawmakers enacted the nation’s first no-fault divorce law in 1969. Florida and most other states quickly followed suit. After the advent of the no-fault law, one Port St. Lucie spouse need only testify that the marriage is “irretrievably broken.” Mostly because of the no-fault law, the divorce rate shot up in the 1970s and 1980s. It has gone down substantially since 2000, but it is still much higher than it was a generation ago.

Today, Florida is a pure no-fault state. An evidence-based divorce is no longer possible. How has the change affected divorce procedure in Port St. Lucie?

Many divorces in Florida are simplified divorces. This streamlined process is available if all the following are present:

That first point eliminates many divorces from the “simplified” category. There is a difference between agreeing to the divorce and agreeing that the marriage is broken beyond any possible repair. The second point weeds out most others, because most marriages involve minor children.

So, most divorces in Port St. Lucie are regular divorces. The moving party files a petition for divorce. About two or three weeks later, the judge usually holds a temporary hearing. This hearing determines things like child custody and family support. These orders usually remain is final.

Roughly 45 days after service, both spouses must file financial documents. That includes things like tax returns and recent paystubs.

If there are minor children and custody or visitation is an issue, the judge usually orders a social study. A state investigator conducts interviews and looks into other aspects of the family unit. Most judges put a great deal of stock in these conclusions. If the social worker makes specific recommendations, these items nearly always find their way into the final decree.

Over 90 percent of the divorces in Florida settle out of court, and many divorces settle in mediation. A third party, who is usually a family law attorney, conducts shuttle diplomacy between the two sides and tries to facilitate a settlement. Mediation is at least mostly successful more than 75 percent of the time.

If there is no out-of-court settlement, there will be a divorce trial. It’s technically possible to appeal the granting of a no-fault divorce. But these appeals are almost always unsuccessful.

The divorce process in Florida has some important distinctions from other states. For a free consultation with an experienced family law attorney in Port St. Lucie, contact Eighmie Law Firm, P.A. After-hours visits are available.