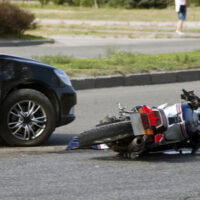 A Stuart man, who was 88 years old, died when a van rear-ended his motorcycle on the Kanner Highway.

The victim was wearing a helmet when the wreck occurred.

Head injuries are usually the most common type of motorcycle crash wounds. That’s true even if the victim was wearing a helmet. Motorcycle crashes combine all three major head injury causes:

Internal bleeding is very common as well. The same forces that propel riders off their bikes cause these organs to bump and grind against each other. Because they have no protective skin layer, these organs usually bleed profusely. Internal hemorrhaging is difficult to detect and also difficult to stop.

Lack of visibility causes many motorcycle crashes, especially rear-end wrecks. Tortfeasors (negligent drivers) simply do not keep a proper lookout for motorcycle riders. Motorcyclists sometimes do things to improve their visibility, such as wearing bright clothes. But there is little or no evidence that these tricks are effective.

Legally, the last clear chance doctrine often comes up in rear-end collision claims. If Driver A has a reasonable chance to avoid a crash, perhaps by changing lanes, Driver A is legally responsible for the wreck, even if Driver B was the rear-end motorist and received a ticket at the scene.

However, there is a big difference between the last clear chance and any possible chance. That’s especially true if Driver A was a motorcyclist. Bikes are not easy to maneuver in emergencies. Frequently, the rider might lose control and cause an even more serious wreck. That’s particularly accurate if environmental conditions were less than perfect.

Rear-end crashes may also involve the contributory negligence defense. This legal doctrine shifts blame for the accident from the tortfeasor to the victim. If fault was divided, perhaps one person was speeding and the other one made an illegal lane change, jurors must split responsibility on a percentage basis.

Florida is a pure comparative fault state. Even if the victim was 99 percent responsible for the wreck, the tortfeasor is responsible for a proportionate share of damages.

Team Up with a Hard-Hitting Lawyer