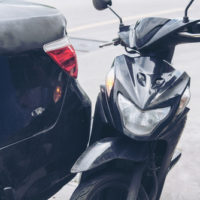 Fault seems clear in a recent Treasure Coast wrong-way motorcycle wreck. But appearances like this can be deceiving.

This wreck occurred in the 3500 block of Southeast South Bend Boulevard. According to witnesses and the Florida Highway Patrol, an 18-year-old motorcycle rider was northbound on South Bend. When he tried to pass a slower-moving vehicle, he collided with a southbound vehicle head-on. The rider died at the scene.

He was wearing a helmet at the time, according to investigators.

Car crashes seriously injure millions of Americans each more. Yet hundreds of millions complete their trips safely even when they are in minor wrecks. Today’s cars are much more crash worthy than the ones which rolled off assembly lines forty years ago.

But motorcycle safety has basically not advanced at all. The bikes that people ride around Port St. Lucie today are almost exactly like the ones that dotted the roadways in the 1970s. Then as now, motorcycle riders have essentially no protection in crashes. So, there is usually no such thing as a “minor” motorcycle collision. These wrecks almost always involve serious injuries like:

In cases like the above story, first responders nearly always fault the wrong way driver. But that may not be the case in a St. Lucie County courtroom.

The last clear chance doctrine often flips liability in these cases. If one driver had a chance to avoid the collision, perhaps by swerving to the right, but did not do so, that driver is legally responsible for the crash. The last clear chance defense is especially prevalent in motorcycle-on-vehicle collisions. It’s rather easy for a vehicle operator to veer slightly and avoid an oncoming motorcycle.

At the very least, the contributory negligence doctrine may apply here. So, even if the motorcycle rider was mostly at fault, his family may still be entitled to damages in a negligence claim against the other driver.