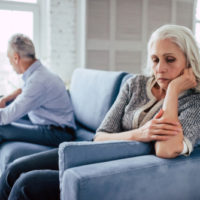 Since 1990, the divorce rate among people under 49 has either dropped sharply or at least leveled off somewhat. But among couples over 50, the opposite has occurred. Marriage dissolutions among this age group have more than doubled over that same time period.

The increased “grey divorce” rate is probably due to a change in moral perceptions and a longer lifespan. The majority of people in this age group now feel that divorce is morally acceptable. Meanwhile, the average lifespan has increased significantly. In other words, many disaffected fifty-something spouses in Port St. Lucie now think that perhaps they should get a divorce, because they may live another twenty-five years.

People over fifty rarely have young children. So, issues like child custody are not as prevalent in older divorces. However, there are still issues in this area.

Adult children in Port St. Lucie sometimes have a harder time accepting divorce than young children. Adults are much less resilient than children. Moreover, adults have a lifetime of family memories which their parents’ marriage dissolution threatens to shatter. There are emotional issues for the parties as well. After twenty or thirty or more years of marriage, the single life can be a very big adjustment.

Florida attorneys are not therapists. However, a lawyer should prepare grey divorce clients for the emotional fallout of a grey divorce. That includes tips on making family gatherings, like weddings and graduations, more bearable for everyone.

While the emotional component may be a little easier to deal with, the financial ramifications of grey divorce are often tremendous. Making matters even more complicated, the financial issues are much different for older couples. Some common areas include:

Factors in a Florida property division include the length of the marriage, any agreements between the parties, the tax consequences of the distribution, and the future earning capacity of each party.